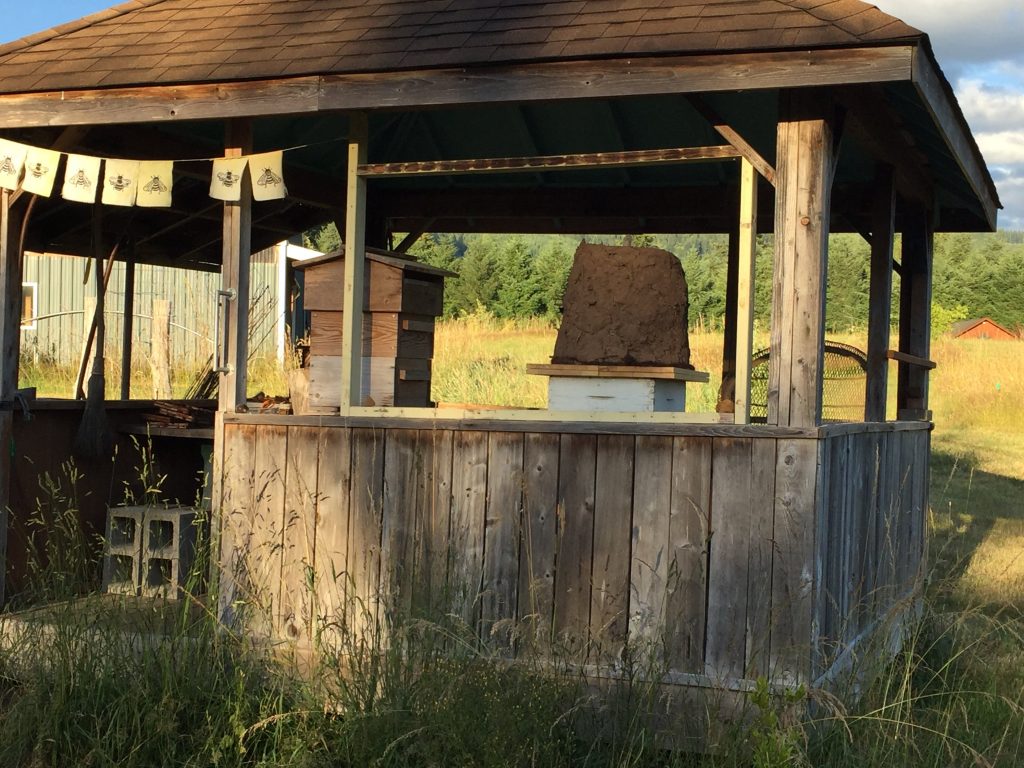 Recently I wrote about the hive I built from sticks, clay, sand and cow manure. The mud hive sits on the right side of the bee gazebo. Soon after I placed it there, I collected a swarm from my friend Anna’s bees and invited them to move in with us.

Anna’s bees are prolific swarmers, putting out three or more swarms per hive. These bees have genetics that tell them to move frequently. This is their protection against pests and diseases. These are smart bees so I was happy when she offered.

Importing bees from distant areas is a bad idea. People want the ease of buying bees, but far too often packaged colonies are inherently weak and that weakness enables mites and diseases to kill the hive. It’s exceedingly difficult for weak bees to be raised treatment-free because they simply aren’t strong enough to survive on their own.

In the best of all possible situations, each of us would be surrounded by friends with healthy hives. If you want to start another colony up, the easiest way is to let your own bees to swarm and choose a nearby bait hive. Second easiest way is to get a swarm from a friend. We do both in our area (southwest Washington) and it works really well for us. 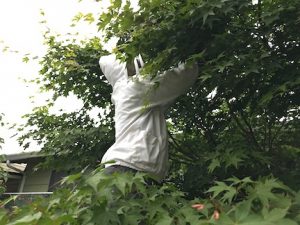 So Anna’s hive swarmed and I went over and picked them up. Here I am in the tree collecting them.

Notice I am wearing a bee jacket. I rarely wear protective clothing around swarms, so why now?

When I arrived, I noticed the sunny blue sky had just turned gray and the air felt like a storm was brewing. That meant the barometer was falling. Bees are quick to feel barometric pressure and foragers will immediately rush to get home before the storm hits. One drop of rain water can send a bee to the ground in peril.

The swarm had quietly gathered on the branch and knew we were about to get doused.

I was aware of the air change so I slowly approached the swarm. When I was about three feet away, I got buzzed by two bees and a scant second later I got bumped by another. Anna was standing a few feet away from her always-friendly bees and she got buzzed, too. That was fair warning. They were on alert.

I didn’t want them to get soaked in the coming rain, so I put on my jacket and veil, stepped up the ladder and clipped the branch. Snip-snip, down the ladder, branch placed in the box, home we go. 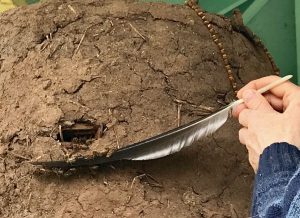 I introduced them to the mud hive by lifting a few bees out of the box with a feather, depositing them at the door, and in they went. These first explorers wandered around, then told the other bees about the available home and they all moved in. 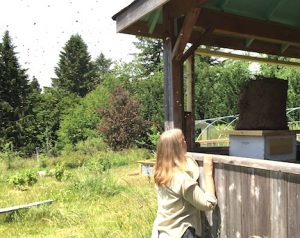 A day later I walked up to see how they were doing and found many of the bees in the air around the mudhive. At first I thought they were absconding, leaving for somewhere else, but as I watched, I noticed most of them flew a bit, then landed on the exterior of the hive, just outside the entrance. Each time some landed, a few leaped into the air, taking turns resting and flying.

I try not to bother my bees, believing that they know about what the correct thing to do is. If I can keep from interfering, they easily come up with solutions that solve problems. If they were in a wooden hive, I would have chosen not to open it. These bees were in the mudhive with an eco-box on the bottom with an opening wide enough for my ipad, so I took a (non-flash) photo to see what was happening inside. 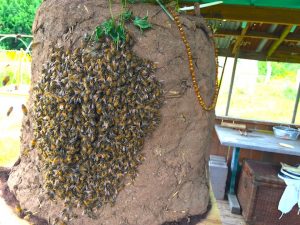 Inside the comb-building bees were busy making comb, but there wasn’t yet enough comb to lay eggs or gather nectar, so the extra bees were sitting outside the entrance waiting for the wax-makers to get a bit further along. Some of them were clustered just inside the eco-box door also staying out of the way. 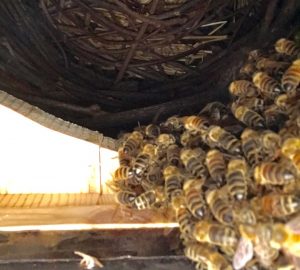 And look what they’d built overnight! All neatly affixed to the twig interior. 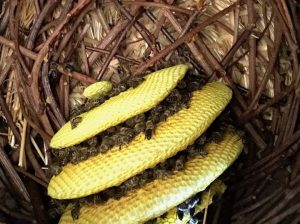 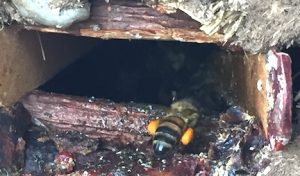 Two days later they had all moved inside and were intent on new fix-up work. Before they arrived, I had carved an entrance hole halfway up the hive and secured the sides with two popsicle sticks. I squished a few dollops of propolis so they had some building materials on hand and now they were using it to re-fashion the doorway how they wanted it.

A few days passed until I visited them again. I was pleased to see maiden bees standing around the doorway scenting their sweet-smelling Nasanov perfume that helps guide the foragers home. They retract the last section on their hind end and mist the area with what to me smells like peanut-butter-honey.

A few days later I noticed the first pollen being brought in, sign that the queen has laid the first eggs. Soon there will be plenty of fermented pollen for the gestating babies to eat. Oh joy! Oh joy!