In the audiobook there’s a moment in chapter two where we refer to an image file. It was difficult to describe the image, so instead we here include the chapter with the image below. I hope this makes the meaning more clear. ~ Jacqueline

The Queen’s Gift and the Drone’s Promise

When I first read that a drone is born from an unfertilized egg, I thought I had misread. How can anything be born from an unfertilized egg? When the queen dips her hind end into a cell to lay an egg, she makes a choice. She decides whether to fertilize it with her vast interior stores of drone sperm or to lay an egg that has naught but her own solo genetic contribution.

Essentially, the drone is an exact clone of the queen except that he is male and his body is completely different from hers in form and function. So he is a clone in genetics only. How is that possible? The drone has no father, but he shares grandfathers with some of the maidens.

During the queen’s mating flight, many drones donated their sperm, which she then holds within her for her entire life. Each maiden is born of the union of one sperm with one egg. All maidens are half sisters with a common mother, the queen, and some of the maidens are full sisters who also share a common father, one of the drones.

The female bees, both maidens and queens, have a similar lineage, both born of a fertilized egg with mother queen (X) and father drone (O). 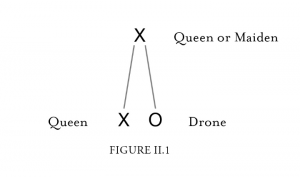 But a drone comes of just the one, the queen. He has no father, only a mother. His pattern looks like this: 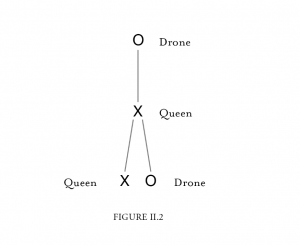 When you carry this out further, it looks like this: 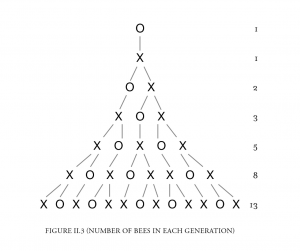 Once you see the numbers of bees in each generation, you may recognize a pattern. When we add each number to the previous number, each subsequent number is the sum of the previous two numbers: 1 + 1 = 2, 2 + 1 = 3, 3 + 2 = 5, 5 + 3 = 8, 8 + 5 = 13, and on. This is the Fibonacci sequence, a mathematical code that is found throughout nature, like in the spiral of the sunflower, the sequential branching of ascending tree limbs, and the scale pattern of pinecones. It is the basis of the mathematical formula called the Golden Mean, the Divine Proportion. This numerical sequence expresses itself in the geometry of crystals, the unfurling of a fern leaf, and the chambers of a nautilus shell. It is evident in the shape of the cosmos and has been used to create mysterious architecture (Pyramid at Giza, Great Mosque of Kairouan), as well as extraordinary classical music. The mathematical sequence even shows up in our perception of beauty.

When I first realized I was seeing the Fibonacci sequence in the drone’s family tree, the image stayed with me for days. I knew it was significant, but I didn’t immediately understand why this magic number was present in the drone lineage. Queens and maidens are, after all, only one generation away from the same sequence.

A few days later the bees explained how the drone is the key pivot point that ensures the preservation of the queen’s line. The drone does stand alone, apart from the rest of the females and singular in relationship to the queen who bore him. He is the one who carries his queen mother’s ancestry and genetic material forward, even in her absence.

The Fibonacci sequence is only activated when a queen—or in rare situations, a maiden—produces a drone. The entire aspect of sacred geometry comes into play only when a drone is born.

As described earlier, normally when the queen grows old and slows down her egg laying, which can happen in a feral queen after five to seven years, the colony readies a cell in which the queen lays the egg that will grow into her replacement. Usually this happens in time for the maidens to raise a new queen before the demise of the old queen. This new queen egg hatches, the dowager retires, and the new queen continues the lineage of the prior queen, ensuring that the colony and its genetics survive. All is well when this happens.

But sometimes the colony loses the queen unexpectedly, before the hive has prepared for her replacement. The hive or the brood area may have inadvertently been damaged or chilled, and no eggs are suitable for becoming new queens. This hive, alas, will perish, and all the queen’s line will die with that colony.

As the colony mourns the loss of their queen, a maiden bee may step forward and call upon her virginal reproductive capacity to take the place of the missing queen. Somewhere in the Unity’s consciousness this maiden recognizes the colony’s situation and is compelled to volitionally alter her structure and turn herself into a temporary queen, fully capable of laying eggs, but only those of drones. Infertile, a virgin, she cannot replace the queen and provide the colony a future, but she can provide a way for the colony’s knowledge to continue even after the colony’s demise.

Parthogenesis is the word that describes the ability of a female to lay a viable egg without that egg having been fertilized by a male. It is a rarity in the natural world. The word comes from two Greek words, parthenos, which means “virgin,” and genesis, which means “birth.” The maiden, when called upon, enacts this virgin birth and sends these last representatives of her line to carry their colony’s knowledge to the world.

In Our Own Words

Part One: The Drone

Every hive is a compendium of knowledge. Every hive has experienced slightly different situations and learned to discern and intuit various conditions in ways that have allowed the hive to survive and progress. For that reason, each hive is singularly important.

Even when a colony loses its queen, her line—the living bees she leaves behind—still bear knowledge unique to her colony. In the case of a queenless and dying hive, great effort will go into raising more drones to carry on her line and to guarantee this hive’s knowledge continues. A host of drones is made ready, and when these drones mature, they will leave the hive to spread their seed. And so the line is preserved.

When the queen is lost, the colony’s knowledge continues by virtue of a maiden who is called, in the queen’s absence, to lay the unfertilized drone eggs. When the eggs hatch, the drones go out and mate with new queens of another tribe. In this way, the knowledge contained in each line continues and always moves forward, even in the loss of the queen mother and the subsequent loss of the entire colony. The drone eggs are fundamentally present in every maiden to ensure the survival of the line.

When a queen lays a maiden egg, she says, “These are of my union.” These eggs are for the hive—for this hive and all the good this hive does.

When the queen lays a drone egg, she says, “This is my gift.” The drones that hatch from those eggs go out and help populate other hives. When a queen lays a drone egg, it is the queen’s gift to the whole bee kingdom. When a drone flies out and finds a virgin queen and mates with her, his queen’s gift is received, her contribution to the eternity of bees fulfilled. The old queen will never see her grandchildren, yet her colony’s knowledge carries on, seeding the kingdom’s future.

Part Two: The Maiden and the Out-of-Season Drone

The code we speak of is God’s design for multiplication. Each number has a precise foundation built upon itself that supports it before it progresses to the next. Multiplication explodes into being. “Here is one. Here are many.”

The code, however, is the natural way of bringing numerical growth, and in such a way that life emerges out of itself. This pattern is far more frequent than imagined. These numbers have a security to them, that they are just and tempered.

The code comes forth in science and mathematics saying, “God’s hand is here.” Protect with all effort where the code expresses. These expressions are crucial components of evolution. And such knowledge is needed to counter subtraction in a world gone awry.

Our last gasp of life that comes of the drones is essential because it carries forth hidden knowledge. When a colony is about to die, each drone becomes the repository of all that colony has known, and the knowledge is woven back into the field. When a colony seems to be failing, let the colony focus itself upon these drones, for by this focus that their secrets are shared, so they don’t remain hidden. Often these drones are presumed errors, but they are not mistakes. They are part of our plan. The bounty of a failing hive is not the left-behind stores. It is the repository of knowledge held in the drone, who is freed to mate himself into the colony who needs what he knows.

Out of season, in late summer and fall, is when these drones are most needed, because at normal spring mating times, there are plenty of drones to seed.

Sometimes we feel the need for more desirable traits that further our colony’s ability to respond to challenges. If a nearby colony has traits we need to express, a proper combining of specific knowledge ensues. We invite the old queen to “abscond,” to leave her home, while bringing into being a new queen. The old queen’s departure is not a mistake; it is simply a shift in course for the benefit of the Unity.

Late-season drones from are meant to find a late-season queen and marry. If the drone’s colony is failing, it has been deemed of more use as a father to a next generation. Thus, all focus of the maidens goes into birthing these traveling drones.

The code continues. The code emerges through a maiden no longer barren, who begets in the drone the sum of the hive. He then carries his exquisite and precise presence into a waiting world.

A maiden who carries the seed of the drone is thought to be unmated. She has been awakened—not by mating, but by a sovereign language within the code that calls her forth. Pregnant with a virgin birth, this expression of God’s love speaks through her, and thus she bears the drone into being.

Excerpt from “Song of Increase: Listening to the Wisdom of Honeybees for Kinder Beekeeping and a Better World.“ copyright 2016 by Jacqueline Freeman.